Wow! Powerful stuff, the LAST day of the year. And what a year! Two weddings. So different. Just like the baby daughters are different. But both lovely and perfect for each couple. Tom’s retirement [about which this blog will devote lots more time].

And Christmas with our new family. There is little that can compare in emotion to the Christmas season. It either brings out the rosy, cheery, almost saccharine sweet, over the top or the bah humbug. I get the bah humbug. I also get the worrying about whether there is enough Christmas in Christmas. To me, the problem is we have far to many cable hours to fill on a machine that was originally call the ‘boob tube’. But enough about that.

It feels very appropriate that we  celebrate a new beginning in the midst of the twelve days of Christmas. We’ve had our Advent time to prepare. To await. To watch. That’s so over. And now, how Catholic! To bring the most pagan of feast days to the middle of a very religious, Christ-centered season. Public relations was invented long before the last century.

The Wall Street Journal had an article the other day about outsourcing your resolutions.  Making your resolutions more than public, but not even written by you. Another, a close, perhaps intimate friend, like a husband or wife, writes your New Year’s resolution. That way, you not only have your resolution out there for all to see, but you have someone else counting on your fulfilling the resolution. Someone who will support and encourage.

In the Pen & Palette, SCBWI Carolinas’ quarterly publication, as RA, I wrote of my daughter’s thought that New Year’s resolutions should be one word. Write! Submit! Encourage! Success! The thought of ONE word being your guide throughout the year is a powerful one. The thought that you can use just ONE word to shape your life is amazing.  My word for this year?

There are so many ways to use this word. Present tense. Past tense. Future tense.

And so. On this, the last day of the year, I wish you great words of your own and

When we talk about eves, as in the night before of THE DAY, there are only three that count: All Hallows Eve, Christmas Eve, New Year’s Eve. I like how they are all amazing each in a different way.

All Hallows Eve is scary and mysterious. We trick or treat in costume with the smell of wood burning in the fire place and spiced cider and blowing autumnal leaves. And we wait for the opportunity to be scared senseless.

Christmas Eve is more quiet. We are awed by  an event, year after year, that, in our faith, we believe there is something greater beyond all of this that we see around us. As the new Mass translation states, visible and invisible.

New Year’s Eve is a wild and crazy eve. A Greco-Roman bacchanalia. Full of noise and celebration, best intentions and resolutions and wanting. There is a lot of wanting for the next year.

So. This is the eve of THE EVE. A time of renewal. Of restoration. Of revival. A chance for new. Today was Tom’s last day of work, employed work, that is.

LOL, this is more than renewal, restoration or revival. This is brand new!

I missed yesterday, well, I didn’t really miss it, turning on my Mac seemed like a lot of work :-). Actually, there was so much going on over the Christmas holiday, I sort of felt like I could do FB, email, G+, OR,  I could spend the holiday with family. No. No. I CAN be a multi-tasker, really. It’s just that, well, why?

This was one of the speediest holidays I think. Ever. Bayley and Dan arrived around 5 something on Friday night, we had dinner, talked, let the puppies know Dan was part of the family. They left. Meghan and Greg, et al, that is with Emma, a

Chow/Shepard mix,  and Amelia, a three month old Newfoundland, arrived. A new puppy is like a new baby, well they are babies. They get confused, they want to explore, this is not normal so they do funny things. A baby Newfi is like a small bear galloping around the house. More fur and fluff than weight, but long, gangly, out of sorts with the body she is growing into. She is lovely. Has a marvelous profile. She also terrorized

Sammy, outweighed him by about eight pounds and outsized him by about eight inches. Missy decided she would be the protector of all things Sammy. Yes. Yes. Fights did ensure. And no one was more disconcerted than Dan. Because when dogs bare their teeth and make growling noises deep in their throats, well then it must be bad. Right? Wrong. Because there is the wagging of the tail that is the final and most complete indicator of mood. Meghan calls Emma’s tail, her Friendship Flag.

Saturday was a blur of breakfast, getting ready for a Christmas Open House, making sure the guest were comfortable and had a chance to talk to the girls and the new husbands. After all, that was the WHOLE POINT. Meeting with neighbors, friends and sharing a bit of holiday cheer and culinary enticements while reconnecting is what the season is about. Christmas Eve dinner and off to Mass to give thanks. 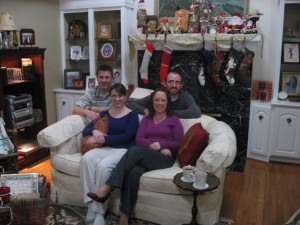 On Christmas morn we learned to that Dan has to either be the one sitting, or, the one on bended knee. Greg did the same, but not to the same effect.  By Monday morning at ten it was just us guys. Our three puppies returned to normal. Sammy to cute and King of all he surveyed, inside the fence. Marcus to his comfy bed and Missy to her own TV.

So. We’ve had our first Christmas of the Fannin’s, the Vogt’s and the Hochradel’s. Together. All of us. It went well. No. It was GREAT! We’ve expanded the Christmas stocking hangers. We’ve added places at the table. And, most importantly,  we’ve added wonderful young men and, now husbands to our hearts.

Merry Christmas!  2011 been an amazing year for this Fannin family. The year actually started in October, 2010 when Meghan became engaged to Greg Vogt and Bayley to Dan Hochradel. So, we knew 2011 would be exciting!

Planning began in earnest in Baltimore, where both weddings took place, first with Meghan and Greg. An April 30 bridal

shower was our first celebration, and before we knew it, it was June 25, and the bride and the groom were, well, beautiful, yes, Greg too!

With Meghan and Greg honeymooning in Paris, Bayley and Dan moved forward on their wedding plans.

An October 15 bridal shower was set. And in no time it was December 10 and we were all back at the Shrine of the Sacred Heart to witness our second wedding of this year, another

beautiful bride and groom, and all too quickly, they left for a honeymoon in Marco Island, FL.

In the midst of all the wedding festivities, Tom and I celebrated our 35th anniversary on September 4 with

a trip to Williamsburg, VA.  And, as of January 2, Tom retires and we start a new adventure in the New Year!

May all the goodness of the season be with you throughout 2012! We wish you a Blessed Christmas and a Peaceful and Joyous New Year!

We are in the final week. The Christmas Cards are DONE! Moving onto the baking today. Looking over recipes, making a list of ingredients.  Yeah! It’s beginning to feel a lot like Christmas. The girls are coming home. Only for TWO days! Christmas Eve and Christmas Day…but it certainly is better than not having them at all. And, we have son-in-laws. My mother would have loved that part. We were three girls, but my mom loved having the boys visit. I think I often wondered if she would have preferred boys…but no matter, we were loved and cherished, instructed and educated, chided and punished until we were able to go out into the world and see it for ourselves. And I think, in some ways, I terrified my mom!

And so I think about story. My stories and they roll around in the back of my head with each and every recipe I pick up and think about making. They fall into my lap when I look at the ornaments on the tree and remember how they came to sit so prominently in our lives. They kick me upside the head when I see the all the Santa’s on the mantle and I remember this friend or that one, some still with us, some not, and I offer a Christmas prayer, and hold close the story.

So. Yes. I am seriously writing….