say series finale,  and you think of a long running show and then lots of publicity, and the loss of characters who have been in your house for what seems like a lifetime. I sort of felt that way with Eureka! On the SciFi channel. I say sort of because when they did the ‘going back in time’ thing, I felt they cheated.  They upped the love story between Jack and Alison, changed the kids and, well, I guess Stark was already dead by then.

Still, I had hoped for a bit more from the series finale.  The whole deal with the show was there were all these very bright, brilliant people who could almost rescue the universe every day, but they  really needed a *normal* person, in the form of a median IQ  intellect of Jack Carter. And he did it well, he continually, stepped into the breach and saved everyone. I liked the dynamic. And then POOF! It was over, bang, without a bang.

The government was closing down General Dynamics and with it Eureka and everyone whom we had come to know, who had been through so much, well they were going to be gone. So instead, they had the scientist from the 1940s who stayed in our present and apparently made a lot of money, who knew?, buy the town. One episode? Seriously? You think that just ties up everything and we’re good?  No. Not by a long shot! 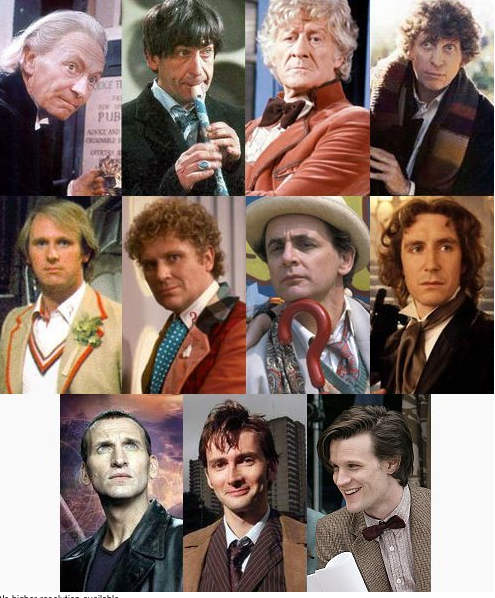 Do you know all the regenerations of Doctor Who?

I just finished reading SHADA, by Garth Roberts. It is the Lost Adventure by Douglas Adams, of THE HITCHHIKER’S GUIDE TO THE GALAXY fame, a regular Doctor Who script writer, and so much more. It’s the story of the Time Lord’s prison for those really bad Time Lords. One would think there should be a place for The Master. Sigh. But no, no mention here. 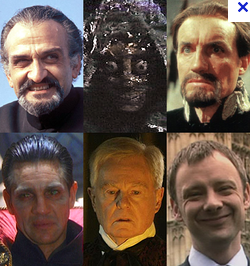 And I’m not talking about  the most recent regenerations of The Master, although they are very bad, very wicked Time Lords. No, I mean the very campy and almost more scary Masters of the 1960-70 Doctor Who.  Like the Terrance Dicks books that used the Tom Baker Dr. Who as the main character, SHADA also uses the fourth reincarnation or regenerated Doctor.

The book jacket to one of Dicks books proclaims–He’s tall and thin, wears a motley array of garments that includes an incredibly long scarf and a battered, wide-brimmed hat–and he’s a centuries old Time Lord.

Yeah, that Doctor Who.  The one of the toothy grin, the flash of insanity in his eyes when he had his first initial burst of an idea and it went wrong, the flapping of his long coat, the flying scarf [which I was always nervous would hang him some day 🙂 and the one with the longest run 1974-81] the one with K-9. Back when he wasn’t the LAST of the Time Lords.  In SHADA, Doctor Who is around 532 years old. And there are still Time Lords and the planet Gallifrey.

So, not the 900+ Doctor of the more recent regenerations. Although, out of all the new ones, I thought Christopher Eccleston did the best job of staying true to the Doctor that I was first fascinated with in back in the early 70’s when I watched it on PBS in LA. The sort of nutty one who would have been a blast to travel with.

In SHADA, the Doctor has to remember the Time Lord prison in order to save the universe from THE UNIVERSAL MIND. The jacket cover suggests that Skagra is a Time Lord,  at the end of the book, Doctor Who says he’s from Drornid, a Gallifreyan colony. Skagra is a humorless, egomaniac bent on universal domination and, of course, the Doctor has to stop him, but first he has to….

No. I won’t tell you what he has to do. Read the book. Enjoy the story. It goes back to the hammy, over the top humor and story line of the 4th Doctor. The one who seemed to have THE most fun playing the part.

There are some pretty classic archenemies.  Holmes & Moriarity. Superman & Lex Luthor. The Jedi & The Sith. Peter Pan & Captain Hook. Dr Who & The Master. Denis Nayland Smith & Fu Manchu.  Not to mention Harry and Lord Voldemort. Classic, meaning definitive, of the highest quality, outstanding example of it’s kind. It’s not just me, you’d be able to come up with all of these and more depending on whether you look in books, TV, comics, toys, or games.  It’s not just that these combinations are well known and are the epitome of what archenemies are, but that most of us can probably say the why, what, when, where and how archenemy status was established on almost every one listed.

This is not a picture of archenemy hood. This is one of predator and prey. There’s no feeling of one being good and the other being evil. Except maybe in a Disney movie, where we have the character overlay. Personally, I’d like the goldfish to be the evil. And the cat be the good. Toss the usual up in the air, throw it around a bit, and let it settle down someplace orange. Or purple. Not here. Someplace else.

It’s hard to create an archenemy, someone evil for ever and ever. Because today there’s always the tendency to make the recalcitrant baddie, never to reform, never to know goodness evil, change, have some redeeming qualities. It’s a shame.  Evil isn’t like that. Oh, sometimes it can seem like it’s changing, making it’s way from the darkness to the light. But no, a bad to the core would never do that. That’s why I like Harry. Tom Riddle has to go down in a crushing defeat, he will never see the light of goodness or charity, he will never know the love that Harry does. He will never have people around him who want to be there, the only people around him will be terrified of him and what he is capable of doing.

Classic archenemies are hard to come by.

When I was at the University of Portland, Oregon, that is, I was a card carrying member of the Procrastination Club…Never Put off Until Tomorrow What You Can Put Off Until the Day After Tomorrow.  But it wasn’t true, I lied [well, it was the 60’s we all lied about something]. I like to be done. Have all my ducks in a row. Neat and Tidy [are there any more clichés I could use?] Probably, but I don’t remember them right now.

And, although my teachers and even my parents thought I was really doing nothing but avoiding, I was doing something. There. In the back side of my brain, there’s this little machine that keeps whirring, just humming along on what ever topic I choose to leave back there. I’ve been having a problem getting from here to there. Ever happen to you? Well, here I am, my main character in my MG story has a couple of irons in the fire, you know, the usual stuff, a dead body next door, a classmate whose mother is not dead, a bully

on the bus and  an older sister who is just about ballistic over being a senior, apparently some people just can’t handle the stress.

I know where the plot goes, but my MC? Not quite sure. So, I’m avoiding the problem. Writing this blog. Making book map of the characters. Avoidance.

Yes, well. I guess it is, July that is.  Had a bit of a pickle in getting the conference registration up and running, although I should have been prepared for that possibility. Ho Hum, wasn’t. It did go up. It’s different and people don’t like different. They say they do, but they don’t. Well, it’s up, working, people are signing up, so I guess we’re good.

I’m trying not to let my own writing interfere with my scbwi work, but, lol, it’s not that easy to do. And, there was a study yesterday in the WSJ about if you sit more than three hours a day you are reducing your life span. Seriously? How many people don’t sit for three hours a day. And. Better question: If I start to do this when I’m already in my sixties, how the h$** can you tell it has reduced my lifespan?  Okay, a little over the top there. But just what I need when I’m trying to do BIC [butt in chair] and get this middle grade mystery done.

They say ‘try to stand, for example, when you are on the telephone.’  LOL, it makes Tom’s pacing when he’s on the phone look positively prescient. Although I do know that’s not true, he just didn’t like to wait. Meanwhile, it’s still July. We got through the fourth okay, although it was a touch difficult for Bayley and Dan. They lost power due to the big storm that came across the eastern seaboard. for five days, forcing them to eat the top layer of their wedding cake five months early or lose it. Weather can be so trying 🙂

Okay, so I’ve been writing so much my brain is in a far off land trying to recuperate. Not likely to happen soon, but I’ll let you know. Now. Back to BIC and the mystery.