So. Finding books is alway tough. I want a story I can love…Yes. I appreciate good characters. But for me it’s more about plot and action. Where is the next big thing taking place? Is it so upsetting that I have to close my eyes? Reading Garth Nix , at the suggestion of the British Isles SCBWI ARA, I chose  Keys of the Kingdom. High concept. All about saving the world. And, yeah, I like those ‘the kid as hero’ books. I’m a true sucker for  rescuing the world…no matter what it takes…carrying a ring to a volcano, finding a sword….it really doesn’t matter, so when Arthur Penhaligon finds the House and the Morrow Days, which are people who control parts of The House. [the House being the true  universe as creafted by the Architect who is missing or disappeared] And. They all have gone rouge, failing their mission, hiding parts of the will so it can not make it okay, and Arthur becomes the true heir, well then I’m all over this. Mister Monday had the lower house, Grim Tuesday had the Pits of Nothing saying s lot about grim, and Drowned Wednesday had the Border Sea, hence drowned…and I have to say all that time in the secondary seas was not fun, a little boring, and except for the bit where they go into Drowned Wednesday, the whale and sort of solve everything.  Now I’m into Thursday and this one is more interesting. Arthur joins the house army,which fights the Nothing or the representatives of Nothing, the Nithlings.  There’s the Skinless Boy, the wings that not only fly but keep Suzy Tuquoise Blue invisible. And a better Leaf, Arthur’s friend from the Secondary Realm—Earth. So. I’m into it, but not as much as I though I would be considering books one and two. I would have thought Arthur would be a  bit smarter by now, but maybe I’m asking too much of an eleven year old,  I’ll keep reading.name I’ll let you know.

it seems my life is a round robin of administration, writing, solitaire, cooking, cleaning, eating, TV, reading, although certainly not in that order and maybe even not that consistently done. The maintenance stuff, eating, cooking, cleaning,  is done with little or no thought, well, maybe a little thought to get through it. The thought is not always connected to the activity. Power washing the front and backyard walks was a good time to mind-ramble as I stood, waving the wand back and forth, cleaning the dirt off the concrete. But maintenance activities are different from administration, you have to think to administrate.

Administration from the original latin  administrate meaning [according to the University of Notre Dame Latin Language site] giving of help. Seriously? How many of us think of administration as giving of help. Maybe when we use it as a verb, as to administer which comes from the late Middle English: via Old French from Latin administrare, from ad- ‘to’ + ministrare give help or service.

Administration has become a word of burden, onus, mind numbing activity. Negative. Less to do with helping and more to do with the plethora of paperwork and red-tape and regulation, policies and procedures. Okay, self confession, I love policies and procedures. I think there is something hard-wired into some brains and not in others. Bayley and I seem to live with regulation tattooed on our spines. Meghan, I would think, not so much. Tom, hardly at all.

And, it’s sad that administrate is seen in a negative way, sometimes derogatory way. Think of other words that are thought of as negative;  bureaucracy, politics, liberal, conservative, bully. Bureaucracy was simply a system of government where the officials made the decisions. Politic at one time was being judicious under certain circumstances.  Liberal could mean used in generous amounts or broadly understood. Conservative was able to conserve, holding traditional values. And bully, at one time a term of endearment, or approval, i.e., bully for him.

I suppose it is a part of language to evolve. Like Gay now being ascribed to a sexual lifestyle when it used to be a term for ‘carefree, lighthearted, showy, bright. Fred Astaire and Ginger Rogers in The Gay Divorcee.  Sometimes I think it’s sad that some words have been turned against themselves.

Regardless, it is time for administration, no not a burden, but a fact.

a limited number of words…

like the fact that time is finite for me,  I think words that can come out of my brain may be finite as well. So, too many conversations, and yes, I do like to talk, too many postings on FB or too many emails, and I feel like I run out of words. Well. not words really, but the ways to put them together. I mean, I want the words to form ideas, pictures, bring forth emotions, stupefy, amaze. Which is really silly to the point of ridiculous. I mean, not many can put words together to do that. Sometimes I think we give far to many people credit for doing it, and then when you find a sentence, an essay or a story that does just that [the stupefy and amaze thing] well, you think all the good words have been used up. There aren’t many left.

I’m not a huge sports fan. S’matter of fact I rarely read the sports section, of any paper. But I have become a fan of Jason Gay of the Wall Street Journal. In a recent article about  Rafe Nadal  he put you right there at the Wimbledon Men’s Finals when he opened with He invited him to a business lunch, and fired him. That’s what it felt like—brisk, efficient and a little ruthless. Rafael Nadal had been reeling Sunday, up two sets to one but drained of momentum when the rain opened up…Nadal scowled at the delay…but overnight in Paris, under a tarp cover, the red-brick dust got drier, and everyone knew what that meant. Nadal would be back in his kitchen, with his knife.  The paragraph builds, the sentences move you forward from one day to the next. Suddenly it’s Monday. Do you not see Nadal dissect Djokovic?

And Novak tries, he works it… Nobody makes reckless look more sensible than Djokovic, and on a muddy court, he began waving his forehand like a flamethrower, taking criminal chances. Yes, that is exactly the way Djokovic plays, and the imagery is extraordinary.

I read two newspapers per day, plus a book or two a week, depending, and I write, and answer emails and think. And, I’m pretty happy when I can read a sentence that forms ideas, pictures, brings forth emotions, supplies and amazes. And then I realize there are a ginormous number of words,  reusable, recyclable, retrievable, able to be reformed and made new. And. I am inspired. 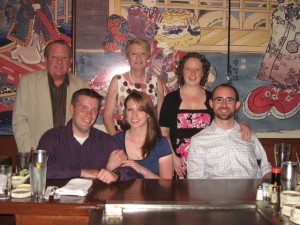 Specifically, Bayley’s.Because it was the big one. From left to right, starting in the back, Tom, me, Bayley, then Greg, Meghan and Dan. Nice, yes? It was a great time. We visited the Skyline Caverns. Tom, Greg and Dan had never been. Meghan, Bayley and I had been there in 1992. When we had the Passport Motorhome and traveled in the summer.

Twenty years ago. My. How time flies. The place is a marvel of eerie and almost unnatural views. To the left is the formation called The Eagle. See the wings spread out across the top? This took hundreds, thousands of years to form. Makes you feel a bit small, short lived, like the way we look at flies. We were treated to marvels. The ‘snowballs’ which are fragile formations that can deteriorate quickly when in contact with humans. Meghan and I both gasped when a man, also on the tour, reached around the netting protecting the 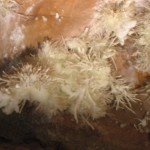 formation from touch and did just that. Touched! If I had been closer I would have slapped his hand. What responsibility to we have, my family and I to protect what is not ours, but is? Whether we were in the state in which we live, the United States or anywhere else, something as precious as what has developed over thousands of years should have the opportunity to be protected by all. 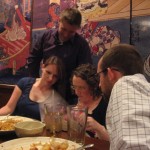 Ah, but I digress. The best part of the weekend was The Book. Tom did this for Meghan, and now it was Bayley’s turn. What a gift! When each of the girls were born I started a journal. LOL, I tried to write it as if I was them. Telling what was going on, putting in cards, bills, pictures, whatever was there to show their lives before they remembered. Before they knew to remember. But, alas and alack, it’s tougher than I could have predicted to keep the writing going. And, after a few years, the notes, pictures and other memorabilia ceased to be tucked into the books. For Meghan’s thirtieth birthday, Tom pulled out the book and all our pictures and updated hers with school photos, birthday pictures, ballet pictures, camp badges and the stuff that made up her years. And then it was Bayley’s turn and he did it again. I may have started it, but it was Tom who was able to give the girls a gift they could cherish, with their husbands, children’s, nieces and nephews.

A lifetime gift. Now, that is family!

June 6, 1964, forty eight years ago. Wow! I graduated from Bishop Alemany High School in San Fernando, California. For me it was a sunny Saturday starting off with a baccalaureate mass, then off to the campus up in the foothills between the Eden Park Cemetery and the Catholic Holy Cross Hospital for graduation. Garnet caps and gowns because our colors were garnet and grey. It was a good year. 1964. I had just turned seventeen. The beginning of the beginning for me.

But, historians remember this as D-Day, 1944, Omaha, Utah, Gold, Juno and Sword. The five sections of the Normandy coast. Supreme Commander of the Allied Expeditionary Forces, Dwight David Eisenhower. Ground force command to General Bernard Montgomery. An operation of land, sea and air elements.  The beginning of the end for Nazi Germany and the Axis Alliance. The day we took a huge chance and went after a terrible horrible enemy. Not just of the Allies, but of all humanity. Seems hard to believe now, when we use terms like Soup Nazi in Seinfield, or call our political adversaries ‘Nazi’, or Hitler. It seems amazing that almost seventy years ago we knew the face of evil. And now, some chose to forget it. We have graduated to a conversation built on hyperbole. hyperbole |hīˈpərbəlē|noun exaggerated statements or claims not meant to be taken literally. But we do, and this is the norm. Perhaps it is the stress of the times; the economic stress, the bombardment in the news of the the bad news, the fact that your paycheck goes fewer places or that your tax dollars go to more places than you can afford. But it is a world where the worst is standard. When was the last time you heard good news that impacted everyone. Not the human interest story. Or the success of one. But where we, as a whole, understood what it means to be understated, moderate and human. Sometimes it seems as if the whole human race, all over the planet is in need of a new graduation, the beginning again!