So, by the time you read this we will be home. This beautiful land will be a memory for us, ten lovely days. We’re staying at King’s Land. Open, along a golf course, with wild goats, the buildings are spread out over a number of acres. One afternoon we took a ride around the Waikoloa area to the Hilton Waikoloa Beach.

This place is amazing. And although I don’t mean for this to be a commercial, you can’t help but be impressed by a hotel that covers sixty-three acres, has over twelve hundred rooms, three large buildings, plus a convention center, a lagoon inside the hotel property and views, OMG, views. As you walk into the main lobby you, check in on one side and

concierge on the other, ahead is a tram. Yes, it’s that big, a tram is needed. And, if you don’t want to go on the tram, well, then, take a boat. We walked into a pavilion that was being set up for an event, and found a small pond on the other side of the pavilion.

As I walked to the water edge, a black swan turned from across the pond and swam

toward us. And then, much like that peacock at the rain-forest zoo, turned and posed, as it kicked large Koi from gathering around it.

The hotel has it own swinging bridge. And views.

Amazing views from the cabana hill just below Buddha Point at one end of the property, to the view Tom is recording on the other. 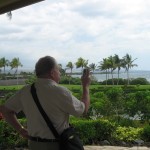 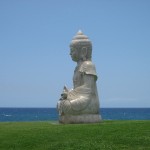 Okay, so here is the rub. This is a beautiful facility. One woman on the concierge staff said that many people come and never leave the hotel. 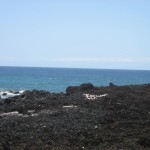 Good for Hilton, if you own stock, well, great for them. But to come all this way, to the most isolated population center in the world, and never leave the hotel? Really? 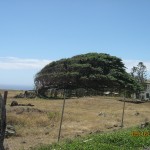 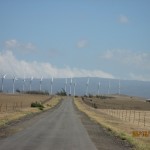 Ah, you thought that existed on our continent? No. Here it is simply called South Point. To get there you drive miles along a two lane road that mirrors the land, twisting and turning, through a couple of national preserves, past a macadamia nut farm to South Point Road. And you still have twelve miles to go. Off to the right are wind turbines, tall, clean lines, long propellers, elegant in their gathering of wind power. The row of turbines turning in the wind is almost poetic. A perfect spot for wind turbines as the wind blows so fiercely there that the trees grow sideways. 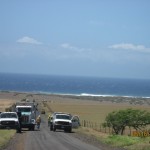 Trying to open the car door if the wind is blowing toward you is a real challenge. Sadly, on the day we went, the state of Hawaii decided to 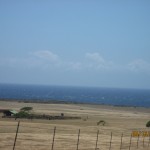 repave part of the road so we could only get within a half a mile. Still, a much different type of beauty. The day before the richness of a rainforest and then the beauty of the plains and the sea. Visiting the big island is sort of like going to all of Hawaii, in one place. 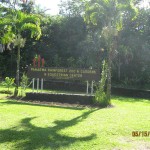 A small local zoo, run by the state of Hawaii. A rainforest zoo just 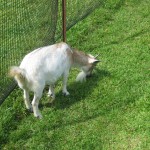 outside of Hilo. A recommendation by one of the staff at Kings Land, and Tom loves zoos. So. Did I mention small? Well, yes. We followed the trail because we didn’t find a map when we were coming in. The trail led us to the pygmy goat. Then as we walked, seeking shade a peacock jumped up and landed on the wall, stopped, posing. Well, at least it seemed that way. 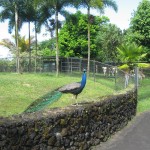 After the peacock we went looking in cages, in many we couldn’t find an animal, but where we did we stopped and took pictures. The Turkey Vulture spread his wings when I pulled up the 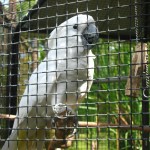 camera, like he, maybe she? knew what was going on. 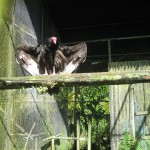 We saw some cockatoos, macaws and sloths, but the fencing was too dense to get a good picture. A couple of red skinned iguanas lying on top of each other and every where there were chickens. Two roosters were fighting beside the cage of a beautiful crested bird, but the ID sign was damaged. Then as we were about to leave, a woman walked by and said, “They can’t bring him out because he hurt his leg, but they are going to feed him now, that’s where 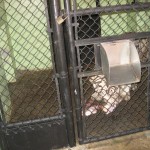 we’re all going.” We had no idea who hurt his leg, and who was going to be fed, but we trucked along with the group. And we came to the cage of a beautiful white tiger, injured, but still up to eating two whole chickens and a couple of pounds of ground beef. Not a good picture, but he was more interested in his food than us, thank goodness I guess.

Finally we left so the little kids could get in there and see. 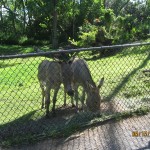 And, by someone’s unfortunate planning, the animals next to the tiger were donkeys. And, although they too were calmly eating the grass you have to wonder, when they hear the tiger prowl and sometimes roar, do they think, “who was that stupid human who put us here?”

But my favorite in the whole zoo was a sign on a tree along the path. 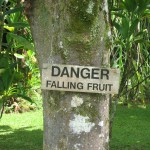 There is a remarkable poster of the Hawaiian islands that shows the land beneath the sea. Well, 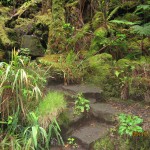 became the islands. Every island has a volcano, because that’s how they were formed. When we arrived here we were told there are thirteen micro-climates from desert to rainforest, and, I guess, everything in between, thanks to the three mountains that make up the Big Island.  The mountainside near the volcano is lush, with ferns, huge ferns, moss, palm trees amid lava rocks. Humid, wet air surrounds you, the dampness a bit chilling, but not cold. 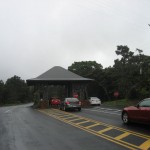 The Hawai’i Volcanoes National Park is part of the National Park Service. It’s funny, no matter what park you enter in the US, continental or not, the design of the Ranger Station is the same. They give you a nice little brochure and direct you to the Visitor Center where you learn that this is a big mountain, and if you really want to see lava flowing

you need to be prepared with boots and gloves and a long hike. So we drove. Our first stop was The Crater.  A huge overlook, a big hole in the ground and a lot of steam and a warning that this volcano has erupted almost regularly since 1984. Life is amazing, you have to appreciate that 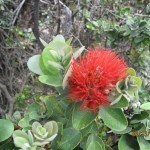 when you see plants surviving where there should be nothing but black stone and gravel. There are trails to 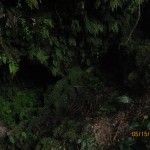 hike, but I think the most interesting thing to see was the Lava Tube. You walk down stairs spiraling, finally flat land and a bridge. Overgrown with vegetation, the land can be dark and gloomy. 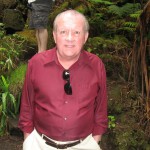 Cross the bridge and you walk through an old lava tube, dank, watery, dark with some human made light. What we walked through was the Thurston Lava Tube, five hundred years old. Lava caves are formed when a river oflava gradually builds solid walls and 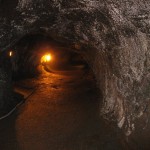 a ceiling.There are signs, Visitor Alert! High amounts of dangerous sulfur dioxide gas, keep your windows closed when it’s visible. A reminder of the potent force that is our planet. It is hard to see the volcano, and since Kilauea is the most studied volcano on earth. We opted for the video. 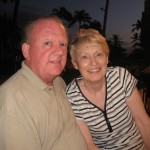 The big island. No joke. I think we’ve put 700 miles on the car in the time we’ve been here. But back to holy ground. First the luau. So this is for you, Gretchen Griffith––pictures.  The Big Island Luau, Legends of the Pacific. It was a commercial thing, you know, they’ve got the various pricing, Alli’i, mean royalty, more cost, better service, closer seats. All good, especially when you can take advantage of a senior 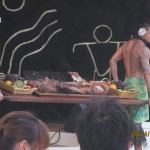 price. That’s the picture of the roasted pig. We sat at a table with two honeymoon couples, a woman given a Hawaiian vacation by her husband, and a couple–he who just returned from two tours in Afghanistan. It was nice, even more so when one of the honeymooners, the he, was taken up to the stage near the end of the performance to dance. LOL, actually he was pretty good.

The next day we set off for Hilo, the rainforest zoo and the National Volcano Park. Getting there

meant going to the other side of the island, and the reason we’ve put on over 700 miles. We stopped for gas in Waimea, $4.56 per gallon. Sheeze, and we complain about the $3.30. It’s insane. The gal at the gas station tells us to stop in Waipo Valley. More black sand beaches. Long story short, as they say and we’re on this back road to the town of Honokoa. For those of us who spent a great deal of time in the Northeast, the roads are 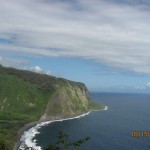 remarkable, flat, long, black, and seemingly, for an island, endless. And 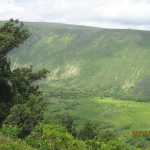 then you end up at a small sign. Then, looking past the sign, you see clear blue ski, white fluffy clouds and this massive expanse of land drop off into the ocean. It is breathtaking. The valley below is serene, and the signs tell you this is a holy place and you can well believe it because you feel it. And then you see the black sand beach. 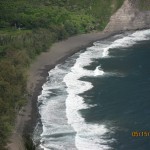 This is larger, more 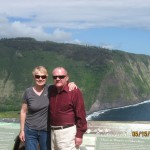 accessible but still, down. A long hike down.

The remarkable thing to remember, is that King Kamehameha II, his father the one who united the islands, abolished the old religion. And while the old religion probably was cruel, superstitious, and demeaning, it also belonged to a people, made them what they were, held them together, and they respected the land. Going to places like Waipo Valley  reminds you that there is good reason to save holy places.