Maybe my favorite season. Fall can still feel like summer when it starts and can be definitely wintry when it ends. It’s got moxie, drama, sensation. It’s not the sappy, coy pinks, blues and pale yellows of spring or the constant multiple green shades of summer. Fall is bright oranges, reds, and yellows that can razzle dazzle you when a shimmering sun is just about to drop below the horizon. Fall is unpredictable, a strong blow can bring those leaves to the ground, covering everything in site.

Fall is messy. I think that may be what I like so much about it. Spring and summer you work in the garden, weeding, trimming, grooming beds. You are taming nature.  It all can look so lovely and so perfect. But nature isn’t. Fall reminds us that nature can be wild and wicked. That it can be a blaze of glory or it can be the frightening shadow of a tree stripped bare of its leaves looking like a fearsome skeleton.

I’m a neat person. There is not a box and container store that I don’t like. Sorted, categorized and labeled, I totally embrace the tidy, the ordered, the system. I always said it was because I had a messy mind, undisciplined, off-track, screaming sometimes for free rein. Clutter is fraught with tension for me. I can feel the muscles across my shoulders tighten, my heart thumps, my pulse races. Clutter is not for the faint of heart.

And still. Fall is my favorite. There is no way to control it. Each year, year in and year out, fall is a test for me. This year, like so many wonderful ones before, let the leaves fall. Let them cover the grass, get caught in the rain chain, slip through the cracks in the deck. Let them blow across the driveway, pile up under the bushes, slip in under the garage door. Never mind. I’m okay with the mess. All too soon all of it will be bland, uniformly bare and winter. Then, only three more seasons to go before Fall is back.

Holidays. There are lots of them. There are the fun holidays, like New Year’s, Martin Luther King, Valentine’s Day [a boon to the floral, stationary and candy making industries], St. Patrick’s Day [arguably for the Irish, but as my Da used to say, “there’s only two kinds of people in the world on March 17th, those who are Irish and those who wish they were.”], Memorial Day, Labor Day, Columbus Day that don’t seem to bring out anything but the holiday mood.

Then, squish. You run right into Thanksgiving, like most decreed, legal and almost universal! So, I have some questions. The whole thankful thing is disturbing and confusing. Do we only say we are thankful on one day per year? Why did the government have to tell us what day that is? Sometimes I think, Lord, we could all break our arms patting ourselves on the back for being so bloody thankful.

And the important thing, you never really have time to digest all the food when you have to face Christmas, which is more than a meal, it is breads and muffins, fruit cake, cookies, fudge plus the meal. Don’t get me wrong. I love Christmas. I love every thing about it, well, mostly everything. I liked it a lot more when I was a kid and not responsible of anything but not eating all the black olives on the lazy susan in the middle of the table, and not eating so much it made me throw up. Yes, Christmas was not about toys, it was about food. I had a metabolism that could break the mile in a minute–food, and lots of it, not a problem.

As I’ve progressed along this journey, the squish has gotten squishier. One of the things I loved as a kid was I KNEW that meal. I knew there would be turkey, with giblet gravy, candied sweet potatoes, mashed potatoes, cranberry jelly, maybe some kind of veggie, but it was just to add color to the table, and of course, the jello-salad, probably with cocktail fruit in it. Oh, yea! Then stupidly we tried change. I remember the year Mom decided to make a roast beef and plum pudding.  Yuck! I remember nothing about that meal, but that it wasn’t Christmas, not really.

So here we are, a full circle, just Tom and me this holiday season. Thankfully, back to the same meal as I loved as a kid.

I need a critique group. I need the imposed discipline. I need the conversation. I need the support. But mostly, I need the brutal truth about my writing. I don’t want, “oh that’s really good.” Or, “I like this.” What I want is––”no, you used that same word five times on the same page,” or, “collapse this part it’s definitely too much information.”

I’m lucky, I get it all from my critique group. But today, it was less about the writing and more about where I was going with the writing. What was I trying to get to. I’m writing a non-fiction. I’ve been toying with ‘is it a biography or is it just about a historical time period?’  I’ve worried that the subject matter is not easily translated into kids-speak. And, what is less history and more my life, I am concerned that the stuff that I think is important maybe isn’t.

So, I’ve been reading a lot of NF and trying to work out what makes a good NF tick. I don’t want a straight time line, you know, born, schooled, lived, died type of story. I’m not working for the kind of book a kid picks up and reads because of a book report. And, I don’t want it to be so full of fundamental facts that a kid will start to read and his/her eyes will glaze over. Oh, my! No! I want a book a kid will pick up and say, “Hey, this is cool!”

The problem is always, where do you start? At the beginning, and if so, which beginning, whose beginning. I’ve tried starting at the very beginning, but if you don’t know the historical figure, then WHOMP, who cares where he’s been born and lived, even if castles are involved. If you start in the middle, where he stepped onto the national and international stage, well, again, who cares. He’s just some dude who was important in the last century. So last century! It you start where he’s made a huge impact on the world––well then, why isn’t he remembered already?

So I was going for the mystery and trying to articulate what that meant to me, the whole raison d’être  of writing this book. And there is was. And one of my critique partners said it out loud. 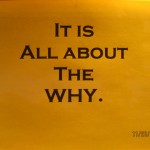 Yes. Yes, indeed. It is certainly, most absolutely about the WHY.

Wow. Fifty years, seems like too long a period of time and still wow!  I love stories about how we came to have post-it notes from 3M. Or how cranberry juice overcame the faux cancer scare of the 1950s to become a product that is on the shelves 365 days per year. The business person in me loves the stories of paper clips, 3D printers, BIC lighters, glow sticks. Who comes up with this stuff? Sometimes we know, sometimes we don’t. There are literally hundreds of stories of some brilliant person who came up with a very simple fix and a product or idea wormed its way into our consciousness and stayed.

Case in point.  William Hartnell was ill, not doing well, couldn’t continue in the BBC show, Dr. Who. the program was a hit. BBC didn’t want to let it go. To replace Hartnell had to be believable and entertaining, not just putting in one actor for the same part and pretending he was the same person, Bewitched comes to mind. Dr. Who was alien, a Time Lord, not like us humans at all, except maybe in his outward appearance. And so we have ‘regeneration’. Brilliant! I hope the person who came up with this idea was paid a huge sum, probably not, but still. And now we’re at fifty years and counting. We’ve had eleven doctors, ten regenerations, and we’re about to have another. Cool, very cool.

But it is annoying. Because we’ve taken a fantastic story device and made it all mystical and literary, deep and mysterious. For heaven’s sake, we have Neil Gaiman [who is hot right now in the fantasy/scifi world, and is just plain hot] talking about the Dr. Who character as if we’ve discovered the cure for cancer. It’s all so Marshall McLuhen, the ‘medium is the message’. It’s less about the doctor and more about the Knowings, those in the know who are supposedly on the inside of the show. These Knowings make a name for themselves and possibly even money, talking about how wonderful and unique it all is, all the parts as they come together. There’s a whole cottage industry of Whovians. They even have a place in the Oxford English Dictionary.

They analyze the doctor. What he represents to us. What we see in this alien who can come and come again. What each actor brings to the doctor and how each imbues the role with his own special and unique flair.

POSH! And, I say that with the utmost sincerity. Posh. It’s no longer about the story. It’s about the humans who are his companions. And the humans are, in many ways the mirror of the doctor, but he never seems to be able to come to this conclusion. Sort of reminds me of Plato’s Cave. Those shadows, those reflections, they are not real life. And, we have no capacity to figure that out.

It’s the end of the week. I like endings. I like beginnings and, truth be told, I like middles too.  Much like chocolate, lol, dark, milk, you name it, I like it.  Today I feel the need to clear my desk and my head and focus. I’m into a nonfiction subject that doesn’t translate well to popular, or children. It’s academic, it’s elitist, and it’s very specialized. Not only that the underlying subject isn’t all that popular.

The answer is that there are more people than I probably even know who are totally invested in this subject. And, the fact that two posters [that have to do with the nonfiction subject] I purchased back in the 70’s from an artist who was a Immaculate Heart of Mary nun, from Mary of the Bushes, as my mother used to say…[sorry, inside joke, the school is in Scranton PA, Marywood College] who became internationally famous for painting a couple of gas tanks off the route 93, right there near the Dorchester waterfront, have stayed with me for all these years. They’ve hung on my wall, my real wall, in my study, in my den, wherever I wanted to be reminded of what it meant to not only have a social conscience, but to have the power to act on that consciousness. It is about being reminded of what it means to have a belief tattooed on your spine, be of your essence, be of such importance to you that to not believe it would be a black hole, a never-ending darkness. My own Catholic and catholic faith is that way for me. In many ways, this subject is of the same ilk, the catholic with a small ‘c’, a word I have always cherished as much as I hold dear the faith with the capital ‘C’. So, back to it!