But word choices do more than define the character and his/her voice. They have meaning, and meaning changes. I saw a posting the other day on Facebook. Adam Rex posted about using the term spastic in one of his COLD CEREAL books.  He said he didn’t realize that was a term that offended people. He apologized for that offense. No offense to Adam, he’s a nice guy with great hair and a perfect name for what he does, looks great on book covers. I’ve read COLD CEREAL, good, fun, well-writtten book, love the characters and the fey! Haven’t gotten to the second book, it’s on my TBR.

I was amazed that he posted an apology. And not. First, I thought of cheap grace, [Grace without price; grace without cost] The book is written, published, out there, lots of kids love the book. Then, “Adam, you are so much better than this,” was my second thought and “Why did you feel the need to apologize to an anonymous someone, on an anonymous forum, only to make people think about it?”  Frankly, Adam weaves a good story, is a solid and strong writer; the word probably fit. He probably used it on purpose because the word spastic has a general meaning of muscle spasm or weakness.

However, spastic, as a pejorative, [which is probably why the apology is so open] is a playground word: one meant for a quick insult, a dart when you have nothing else to shoot, as in “Watch where you’re going, spastic.”  Or, more likely, when I was growing up it would have been, “Watch where you’re going, you Spaz.”  Yes, if you were the receiver of the insult you were either embarrassed by the term or immune to it, such was playground life.

What didn’t make us want to curl up into the pre-natal position only made us stronger.

I was a watcher, even as a kid, the outsider, maybe the receiver of the pejorative, whatever form it took, more than the giver, although I did spit out my fair share (I have two sisters, after all, one older, one younger–life in the middle can be daunting if you are faint of heart). And, the nuns were more interested in us expanding our vocabulary than in being guardian of our little psyches.

But, I’ve I often wondered who was more damaged by the name calling, the giver or the receiver.

I grew up with many mantras to recite in adversity. Sticks and stones may break my bones, but names will never harm me, was one of them.  Then it was playground talk. Today we call this bullying. We are no longer able to be nasty little kids and learn that we shouldn’t do this. Today the child who uses words to attack, whether for the first time or the fiftieth, is a bully. And today we call it by a very official term,  an ad hominem attack; that is, lashing out at the person.

Now if you look up that little rhyming playground mantra, what pops up is a changed last line– but words can also hurt me. Words matter, I do get that.

There should be a List Anonymous. Like for alcoholics, it’s an addiction. To make a list is to be able to organize what usually is a bit of chaos. At least for me, it felt like I was bringing some certainly into an uncertain world. Not that my world was ever difficult. It was pretty ordinary. Even an ordinary life can be chancy or even a bit miffing. I was thinking about this while writing my latest book.

The MC thinks of her life as ordinary. She lives with her Grandmother. Her father is there, but he defaulted parenting to his mother after his wife died. He is on the edge of her life and then her grandmother dies. Her father is accused of murdering her. While she’s not close to Dad, it still seems strange and unreal that her father world kill his own mother.

While I love all my electronics, and always have, there is something startlingly real and comfortable about being able to see a list on paper. I am a huge proponent of computers, tablets, smart phones. But I am a collector of journals, logs, notebooks, pads of paper. I believe there is a connection between the hand and the eye and the brain.

A handwritten list is private, personal, for only so many eyes only. It can be limiting. Limits are not bad. Limits can be mind expanding. By not being able to venture out,  to be not be bombarded with sounds, smells or electronically, not be enticed by social media, encapsulated information, you have opportunity to stop, reflect and think.

Lists can do all of that!

Angels.  Both the good guys and the bad guys. The Father is gone and apparently no one knows where. Which is strange because where could God go? To another universe? Is he hiding? It’s obvious in this TV show God has left mankind to it’s fate and the angels are fighting over it. Michael and Gabriel are on opposite sides. And both are very hedonistic. They actually can kill and not in the name of God’s justice, but in their own.

Sadly, this show, with its stilted acting, horrible plot holes and diminished and limited view of dystopia is what passes for fantasy on TV today.

When there is talk about the secularization of today’s society, this show can be pointed to in understanding just how non-religious, non-faith based our civilization is. It’s hard to fathom a world such as this TV show, Dominion. There is little in the scripting for us to understand how this dismal, corrupt and venal society came to be.

Every Lent I read the Screwtape Letters. Every year I am amazed at the audacity of the devil, because, after all, the devil is a fallen angel. One who wanted to be equal to God. One who was not content to sit in the glory of God. One who would be pleased to have company in his darkness.

I loved It’s a Wonderful Life. Clarence really wants to do is bring George to the bright and light side and then go himself to heaven. Clarence may be a bit bumbling, but he has it right. Other, more recent movies out of Hollywood that show an angel as wanting to be human, to live with humans, to leave heaven are absurd. Why would this temporary and not even idyllic world be a better place than heaven?

Angel of God, my guardian dear, to whom’s God’s love commits me here. Ever this day be at my side, to light and guard, to rule and guide.

A child’s prayer. To understand that even with all of God’s grace, we still needed someone to devote themselves to us, to be there for us, on our shoulder. It is ludicrous to think of angels as being jealous of us, wanting to harm us, ready to destroy God’s work.

I’ve recently attended several programs that include the writing issue of plotting and structure. Yea! I like that, because I am basically a plot kinda person.  Almost more than the character, although the characters have always mattered, because, after all who is it that gets you into the story? 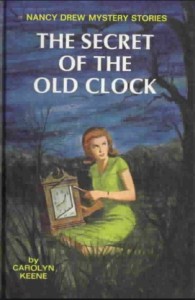 The quintessential book of my childhood was Nancy Drew. There she was, with her own car! and friends, a parent who was indulgent and just enough older than me to be fascinating. So, THE SECRET OF THE OLD CLOCK, right? It think I still have my copy. I mean

, no I was never really interested in old clocks, but I will always be interested in mysteries. And, while the picture of Nancy, in the middle of a rather eerie looking forest, was somewhat intriguing, what I really wanted to know was why. Not the who. I knew the main character would solve the puzzle, and I wanted to know how she’d do that. So, plot. The action that moves the story along.

And, that’s where I am now. I definitely know who, I’ve got my main character. I’ve done the profiling thing, what she eats for breakfast, how she mows the lawn. I know how this thing ends, I’ve got the voice, at least my critique groups thinks I do. And I know the major steps. It’s the middle.Sheeze, isn’t it always the middle.

In doubles tennis we say, down the middle solves the riddle. That means you’re putting the shot where the other team can’t reach it. But this middle is different. Not tennis.  I’m at that part where I’ve chased my character up a tree, and I know how she’s going to get down, I just have to work on what happens to her as she climbs up higher. And what rocks I’m going to throw at her while she climbs.

Ha! Off to make rocks.