Which brings me to the Penderwicks. Or Jeanne Birdsall’s The Penderwicks.  I was looking for a book that would not have any relevance to what I was currently writing which was narrative non fiction and middle grade mystery, looking for something that would be totally different. For night time reading I use the North Carolinas Digital Library. I like it because I can go on at 10 pm at night, find a book and read for an hour. And while I miss the physically holding and hoarding of books on my shelves, truth is I would be going to the library on a regular basis were it not for the digital library and, Sigh, they are usually not open at ten at night. 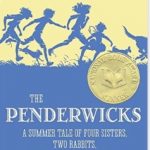 So, back to the Penderwicks.

There are four books that start with the family as they go off on vacation. There are four sisters between age eleven and baby. These are nice kids, obedient, loving, careful of each other’s feeling when they remember, which is most often. The feel of the stories harken back to a time when play was mostly out of doors, families ate dinner together, and respect for adults-father, teachers, neighbors–was a good thing and always present. While the setting seems contemporary the story also feels like it’s historical, a long time ago.

And once you are hooked on the lives of the family and their neighbors you continue to read in the series because you have come to care about their relationships, their problems and how they manage their solutions. What I love about the stories is the way Ms. Birdsall was able to give us completely distinctive children, with different voices, likes, dislikes, and talents. I was enchanted with books one and two. By book three the oldest of the siblings was off on her own vacation, leaving it to the remaining three to carry the story. By book four, it was primarily the youngest who, along with a step brother, takes you to the end of the saga.

It was grand that Ms. Birdsall gave us closure to the family story, although, I think it came at a price I was not willing as a reader to pay. I personally prefer stories to end at a good place, not necessarily the end of the story.  I get that JK Rowlings ending Harry so there could

be no more stories, but Wait! there is. Now I have not yet read this, but there was a promise at the end of book seven that this was it. We knew Harry married Ginny [about which there is a ton of commentary] and they had children and  Hogwarts as a school of magic continues. Good. Then This?

Back to the Penderwicks. Rosalind is all grown up and in love with the obvious choice. Skye is still independent. Jane is working toward being an accomplished author and Batty, the youngest, is now a responsible child, no longer the baby of the family.

Hmmm….I get that it’s the author’s right to say how the story ends. Somehow, tho, as a kid, I always the the best stories were like The Giver, where the author led us to the end of the story and let our own imaginations take the character where ever we wanted. Lovely as The Penderwicks are…I’d would have loved to imagine, rather than being told, where they would go.

Does any writing count? I means if I am writing email invitations to possible presenters? Or answering a friend about an issue? Or completing a post, like this one?

If I were truthful, which I want to be, the answer would be no. Because I have been a world-class, olympic gold medalist procrastinator for a long time. In the past my procrastination technique has included ironing–amazing yes?–reading, mostly mysteries but anything that I could put in front of me. Procrastination never really included television, but today it includes reading on line anything from social media, yes Facebook since I really don’t see the point in reading tweets one after the other, to online blogs and newsletters.

I tell myself that in the back of my brain I am writing. And sometimes I am, but not usually. What I am doing is putting off what I can’t get to, waiting until something drifts apart and then comes together so that I can ‘see’ the end result. Sometimes it takes weeks, sometimes hours, sometimes days, but it takes. And that what procrastination does, takes. I should put that as a sign above my desk!

A Short Story About Elections

I vote every in every election! I think it may be one of the most thrilling things I do. You may say I have a very boring life, but no, that’s not why it’s is thrilling.

Like a lot of mid twentieth century families, we had a subscription to Reader’s Digest, the small five by seven magazine appearing monthly on the coffee table. When it would come, the first thing I would do was go through and read the funny bits. The little stories, the jokes.  Life in these United States was one of my favorites. It was right around the time I was able to register to vote or getting ready to register [so yes, this was pre-1971]  and it must have been a midterm election not a national, because the story was about this town in the middle of nowhere, somewhere on the western side of the country, maybe a population of a  couple of hundred. The town was going through the sort of phone-it-in election of a mayor and a city council, town clerk, all these small town jobs that the townspeople probably took for granted, and dutifully the town voted in the ones willing to do the jobs, year after year.

This was back when you voted on Election Day, no early voting, you had to show up at the polling place, usually a school cafeteria or a church hall,  between seven in the morning and seven or eight at night.  Well, this particular Election Day came and went just like normal.

But not! When the count came in there was a surprise–the people who got the jobs were not the ones who always had the jobs. Yes, these new people were known in town and, well, it was almost a ritual that they ran against the ones who did the job, you know, just for the sake of democracy. The big surprise was that everyone who won got just one, yes, one vote.

It seems there was this twenty one year old. This was his first election, and he was so proud and excited about being able to vote. He read all the background about what people said they would do if they got the job and he voted. Turns out he was the only one in the whole town who voted that election. So come the next morning a whole new set of people were in charge of the town.

Was the story true? Hell if I know. Can I find out? Not even looking. This is what I do know!

No matter where I live I make sure I can vote. I steer clear of the campaign rhetoric, the TV ads, the pundits, the columns. Do I read them? Yes,  but I also read the speeches where I can, [because four years of Latin taught me oratory is delivery] read at least three or four newspapers and I read all the background information I can find. I look for League of Women Voter material, online websites, .gov websites and make a decision, whether it be for president, judge, attorney general, mayor or even if it is for dog catcher.

And so I vote every time there is an election, no matter if it is national, midterm, or  local. I have never forgotten that story, that just one person voting could make a difference. And each time I vote, I think of that kid. And I wonder, what if I was the only one voting?  And I always smile as I walk into that booth.