I missed yesterday, well, I didn’t really miss it, turning on my Mac seemed like a lot of work :-). Actually, there was so much going on over the Christmas holiday, I sort of felt like I could do FB, email, G+, OR,  I could spend the holiday with family. No. No. I CAN be a multi-tasker, really. It’s just that, well, why?

This was one of the speediest holidays I think. Ever. Bayley and Dan arrived around 5 something on Friday night, we had dinner, talked, let the puppies know Dan was part of the family. They left. Meghan and Greg, et al, that is with Emma, a

Chow/Shepard mix,  and Amelia, a three month old Newfoundland, arrived. A new puppy is like a new baby, well they are babies. They get confused, they want to explore, this is not normal so they do funny things. A baby Newfi is like a small bear galloping around the house. More fur and fluff than weight, but long, gangly, out of sorts with the body she is growing into. She is lovely. Has a marvelous profile. She also terrorized

Sammy, outweighed him by about eight pounds and outsized him by about eight inches. Missy decided she would be the protector of all things Sammy. Yes. Yes. Fights did ensure. And no one was more disconcerted than Dan. Because when dogs bare their teeth and make growling noises deep in their throats, well then it must be bad. Right? Wrong. Because there is the wagging of the tail that is the final and most complete indicator of mood. Meghan calls Emma’s tail, her Friendship Flag.

Saturday was a blur of breakfast, getting ready for a Christmas Open House, making sure the guest were comfortable and had a chance to talk to the girls and the new husbands. After all, that was the WHOLE POINT. Meeting with neighbors, friends and sharing a bit of holiday cheer and culinary enticements while reconnecting is what the season is about. Christmas Eve dinner and off to Mass to give thanks. 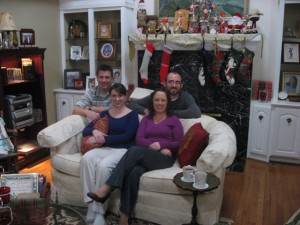 On Christmas morn we learned to that Dan has to either be the one sitting, or, the one on bended knee. Greg did the same, but not to the same effect.  By Monday morning at ten it was just us guys. Our three puppies returned to normal. Sammy to cute and King of all he surveyed, inside the fence. Marcus to his comfy bed and Missy to her own TV.

So. We’ve had our first Christmas of the Fannin’s, the Vogt’s and the Hochradel’s. Together. All of us. It went well. No. It was GREAT! We’ve expanded the Christmas stocking hangers. We’ve added places at the table. And, most importantly,  we’ve added wonderful young men and, now husbands to our hearts.