Is there picture showing more tenacity than that of a dog with a bone?  Our Irish terrier pup,  with wolf teeth and paws that remind me of Sendak’s Where The Wild Things Are monsters, can take a ten inch bone and reduce it to nothingness in less than one day…when she wants to.  And yes, this is her ‘natural’ look, a bit of a bed head in Brindle Blue, forty pounds, long body, five inches off the ground with a bark like a Newfoundland with one hundred less pounds.

Tenacity: The property or character of being tenacious, in any sense. Some may say,  Never say Never! 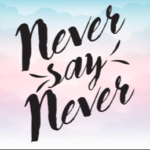 Never say Never was one of my Mom’s favorite rejoinders when I would swear I would never again do….whatever I did on that particular day.  She would usually follow it up with, “Or you will end up living in Texas.”  My mom’s view of Texas comes from the time my parents  moved from Baltimore to LA in the late 1940s traveling by car. Somehow, on the trip, they drove through Houston. Mom claimed that the mosquitoes were the size of small birds.  We will not go into what General Sheridan said about Texas and hell. 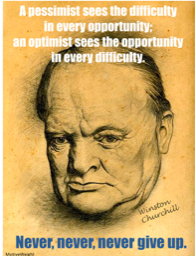 My view of tenacious is more Churchillian. Like all great men of history, or women too,  for that matter, Churchill was complex and difficult.  He  had tenacity, resolve and persistence tattooed on every bone in his body. His leadership during the Blitz of London, along with the participation  of the King and Queen, is legendary.  His never was never give up!

Recently in a workshop entitled, An Author’s Arsenal: wounds and weapons for writers,  we have been involved in a discussion about how to injure, fatally or maybe not, and what weapons would work. The homework assignment at the end of the first week was to identify a weapon and how it was used. If someone already chose a knife, you had to come up with something new.  My main character chose, so I thought, a flashlight which she placed in front of the eye of the villain making her jerk back and fall on a small lawn statuary cracking her skull.  At first I clung, tenaciously, I might add, to the idea that flashlight was the weapon. And under the guise, of never, never, never give up, with sure persistence, I wrote a long response to the instructor as to why that was the weapon, not, as the instructor claimed,  the lawn statuary. 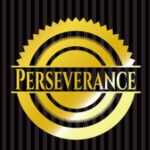 But even my pup will put aside the bone for a while, and while persistence and tenacity are virtues, in my humble opinion, truth was I lost sight of what precipitated the injury and what killed.  The upshot was, as the instructor pointed out,  I was persistently confusing cause of the incident with cause of the injury.  So now I know! Sounds simple when I say it like that, but whoosh, I was like a dog with a bone.