Ralph, on the top step, shown here with Claudia, was our first dog.  We lived in an apartment near Cranbury 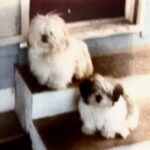 NJ  and we found this six month old puppy at the local pet store. Fluffy, fuzzy and kinda lost he was ours within minutes.  Both Tom and I worked so Ralph was crated during the day and out for walks early and late and given lots of love.

One evening Ralph walked out of his crate limping. We checked him out and could find nothing.  This went on for a couple of more days and we decided to take him to our vet.  When we got into the office, we noticed that Ralph was limping on a different foot!  So we got Ralph Claudia. 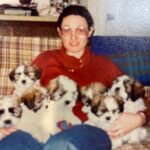 We kept the runt, who had a heart condiditon, that if not remedied would be fatal in months. Marcie  had open heart surgery at UC Davis small animal clinic and lived to be seventeen.

When our first born child was fifteen months old, there was a dog show at the local park. We left our three Lhasas at home and we went for 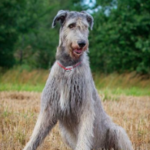 the afternoon.  Walking around we came up to a most magnificant silver grey Irish Wolfhound. Meghan reached up one tiny little hand. The dog lowered her head.  She grabbed the dog’s beard, the only part she could reach.  As toddlers are wont to do,  the child proceeded to squat, never opening up that tiny fist, bringing the dog down with her until the dog laid down and Meghan  could touch her nose. The two sat for a minute, communing I guess, until Meghan hugged the dog’s huge head and stood up.

We have, since Ralph, always had more than one pup.

Ralph was loyal and grumpy. Claudia was the alpha dog, as was Grady, a North American Shepherd, who found us one rainy January day.  Marcie, our runt, was loving and trusting.  Marcus, found at a PetSmart, was a true sweet mutt but afraid of everything.  Sammy, a Rat Terrier, rescued from the street, was the most curious and the smartest. Missy, a coonhound and a true pack dog, found by Tom in his work parking lot, the largest dog we ever had, tried to be in charge, never won and eventually gave up and, in her old age,  liked 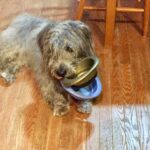 being an only child until Keery came along.  Keery, a Glen of Imaal,  was not interested in sharing with Missy, or now with other dogs, she is indifferent on a walk and in the groomer’s and can be overly cautious.  At home she’s bossy and picky.  She demands, from the humans she encounters, at the very least, acknowledgement of her presence and she is definitely ours.

I have never met a dog I didn’t like, or a dog who didn’t like me…sometimes it may take a bit longer than I anticipate, but eventually we do make friends. Cats are cute and indifferent. Parakeets are interesting [and messy]. Guinea pigs, like turtles, lizards, rats, and fish, are…that’s it. They are. I know people like goats, pigs, crocodiles, even. But no! I never truely trust a person who doesn’t really like dogs… BTW, it is okay to not have dogs…I get that too.

I am, like my dad, a dog person. Why? Because dogs are  a reflection of the best of us. Dogs may have evolved from ruthless packs of wolves. But look what they evolved into!  For me that Irish Wolfhound understood and accepted Meghan as an innocent.

Dogs display the best of human traits in the best of ways–pure, simple, straightforward.  We all have images of the  loyal companion, the tireless service dog, and the fearless rescue dog,  regardless of breed or size from the  tiny terriers to the greatest of Danes.

And that is why no editor or reader ever said ‘don’t kill the guinea pig!’

But editors and readers do say, don’t kill the dog!