I’ve been to the Magic Castle. Nope, have no clue how they do it. I don’t watch ‘behind the scenes’ shows. I don’t want to read blogs on the main characters. Or how the actors live. I grew up in Los Angeles. Went to school with children and grandchildren of ‘those Hollywood’ folk. There was no paparazzi. There was no stalking. They were just ordinary people with a job in the movies.

Hmmm…do I believe in Magic? Sort of. Yes, that wand would be cool. Yes, that spell book would come in handy. Who wouldn’t want all of that? Just a wave here, a snap of a fingers, a few words there and, bob’s your uncle, BAM! Done.

Some say magic is to some, what science is to others. Would I use magic? Probably no. It feels like it we don’t have it because it is too easy. But I do know magic.  I’ve been a reader since forever. I’ve been to places that no plane, train or ship could go. I’ve seen worlds that are too horrible to contemplate, or are too much fun to miss, or are just downright lovely to spend time in. Reading is magic! That is what I am looking to create.

I think of those ‘behind the scenes’ shows and wonder if anyone would be as excited to see a writer shaping a story? Creating a world?  You create a character. You give him/her life, foibles, obstacles. You provide family, homes, towns. You record their thoughts, ambitions, musings. So, yes, I do believe in magic, but not the kind with a wand or a spell book.

I’m at that middle of a narrative nonfiction that is a slough. The writing is hard because the subject is hard. While it has been discussed in very academic circles, in MG/YA, not so much. I’ve got to get in some information. Yes, it’s important. Can it be boring? Can it difficult to translate for high school kid? Yes.

I’m sort of at that place where I know what comes after, I know 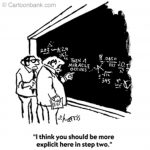 how the narrative continues, but this one place! THIS. ONE. PLACE. Sigh!

Yes, it would be a miracle. And I’m letting it block me. And so, I think I will put in my draft ‘something happens here’ and move on.

Is that a good choice? I have no idea. My goal is to finish this narrative by the end of summer. So I have a couple of months. But time does fly. As if by Magic!